Ways to Get Arrested # 5

You have seen them before, little plastic boxes with the days of the week stamped on the compartments, Monday, Tuesday, Wednesday, you know we put our pills in there so we can organize our medication. Or if you’re a guy you just slip a couple of prescribed vicoden into your pocket in case your tooth starts to bother you. Last night I helped a fellow get out of jail for possession of Drugs/Schedule 1 or 2 because his pain medication fell out of his wallet when he was producing his license for a traffic stop. Oh yea he’ll probably produce his prescription at his trial and his charges will be dismissed but he still went to jail, have at least 2 court dates and have the arrest: not conviction,  on his criminal history. Calling a bail bondsman 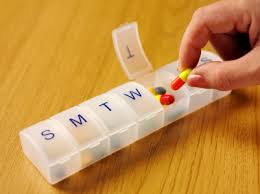 and paying the $100.00 will seem like a sweet dream compared to what comes next.

He was placed on pretrial supervision, it is kind of like pre-conviction probation. It sort of flies in the face of the presumption of innocence and is arguably one of the driving factors in the alarming and unprecedented and ever-increasing incarceration rate in America.

Pretrial service agencies started out as what seemed like a great and noble idea. In 1961, Russian born philanthropist Louis Schweitzer and magazine editor Herb Sturz (Open Society Institute) saw an opportunity through then Attorney General, Bobby Kennedy to alter the bail system in New York City. It appeared that many inmates of color were being held on bonds they could not or would not pay. We in the Bail Community know that very few people stay in jail because of money…they typically have burned every bridge they’ve crossed and no family member is willing to indemnify them. One of the huge problems with pretrial service agencies is the removal of family influence on the offender. To five you an idea of the toll the pretrial services act of 1982 has taken on America. In 1982 there were 139 people per 100,000 incarcerated in the U.S. As of 2009 there were 754 per 100,000…. More on this later.

In the end, these cases usually come down to a scenario that looks like this: Plead guilty to a felony and you will serve no jail time, 3 years probation, fines community service and a drug class. Plead guilty to a misdemeanor and get 1 year in jail,(misdemeanor time in Virginia is served at 50% so 6 months in jail) How this common practice in pretrial negotiations benefits the State or society is a mystery…Stay tuned to 101 ways to get arrested on the internet!